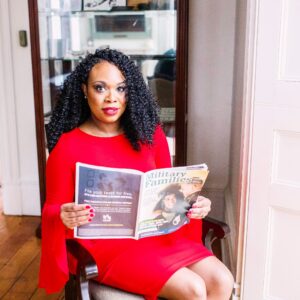 he Bautista Project: A Conversation with Co-Founder and CEO Marla Bautista

Marla Bautista is a successful military spouse. As an author, blogger, speaker, and co-founder and CEO of the nonprofit The Bautista Project Inc., she’s been decorated with awards such as Armed Force Insurance 2018 and 2019 Military Spouse of the Year Base Winner, and her family was named a 2020 General H Norman Schwarzkopf Military Family of the Year from the Central Florida USO and Tampa Bay Buccaneers.

While extremely accomplished, Bautista is also eager to give encouragement and advice to other military spouses and is honest about her earlier struggles. Throughout our interview, she discussed her journey to be an author, her passion for making an impact on homelessness, and how to make event facilitation a success. Of course, she also had specific advice about writing and other military spouses working to pursue their passions.

Bautista has been telling stories and writing since she was a little girl. She recalled, “I used to sit in my closet, I had a little walk-in closet, and I would read books and write short stories and poetry.” Much of her childhood and young adulthood was challenging and traumatic with facing the death of her parents, abuse, and homelessness. Writing was a way to “imagine words that were safe and fun and inviting,” she says.

END_OF_DOCUMENT_TOKEN_TO_BE_REPLACED

According to Verified Market Research, the global events industry is valued at around $886.99 billion and is expected to grow an estimated 13.48% between 2021 and 2028. While those numbers may seem mindboggling, remember that we are all still returning to normal after the pandemic. As we move past the critical stage of the COVID-19 pandemic, we will be attending or planning more and more events and brushing off those rusty, in-person corporate social skills.

If it’s been a while since you have had the opportunity to plan a business event, or if you started your business during the pandemic and need assistance on entering the event-planning world, Powerhouse Planning can help. Whether you are looking to provide some team-building experiences for your company or are ready to host your first conference, we offer a wide range of services that can help you bring your business to the next level. Contact us today for details. 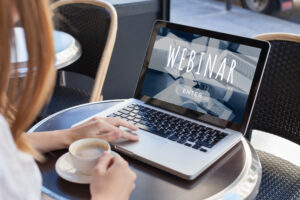 3 Tips to Maximize on Virtual Events in Your Marketing Strategy

From convenience to cost, virtual events pack a big bang for both businesses and event participants alike, and “many companies are planning to host even more online events in 2022 than they did in 2021,” according to an Inc.com article. You’ve got a green light to level-up your marketing strategy in 2022 using virtual events to your advantage. So, how can you maximize your return on events?

Video and events are positioned to be the top two content marketing-related investment areas in 2022, and the investment in these events is expected to grow. According to the Content Marketing Institute’s (CMI) “12th Annual Content Marketing Benchmarks, Budgets and Trends: Insights for 2022,” among the survey respondents including marketers and professionals, “51% rated webinars, webcasts, and web series first when it came to producing results.” Highly successful marketers “prioritize the audience’s informational needs, differentiate their content from the competition, and craft content based on specific stages of the buyer’s journey,” says CMI. END_OF_DOCUMENT_TOKEN_TO_BE_REPLACED 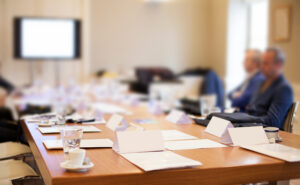 Events with Heart: The Kelly Principles

“Whatever else anything is, it ought to begin by being personal.”
– Meg Ryan, You’ve Got Mail

Meg Ryan may just be a business maverick. Okay, not Meg Ryan herself, but the character she plays in the movie You’ve Got Mail—Kathleen Kelly. Here is this young woman who finds herself fighting to keep her children’s bookshop afloat when a large bookstore chain moves into the neighborhood. A classic David and Goliath scenario.

Now, if you have seen this movie, you are probably thinking, Wait a minute. She lost that fight. Goliath won. How exactly do you want to hold her up as a successful business example?

And Kathleen Kelly has a thing or two to teach us about hosting events, no matter what size or scale they may be.

END_OF_DOCUMENT_TOKEN_TO_BE_REPLACED 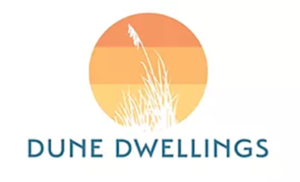 “Our vacation rental business grew pretty quickly, and we struggled to keep up with the guest needs, so we hired Powerhouse Planning to take over the role of guest experience manager. Even though Jennifer has never been to any of our properties, she handles guest booking requests and needs better than we ever did. Powerhouse treats my business as if it’s their own and takes pride and initiative that is really hard to find these days.”

Event facilitation encompasses a lot of things in the business world. From small, in-company events to large corporate conventions, event facilitation takes on many diverse forms. For an overview of event facilitation, covering everything from what constitutes an event to how to devise a event budgets, check out Cvent’s “Must-Know Guide to Corporate Event Planning.”

Have you been tasked with planning your company’s next event? Need a primer on what to think about and the types of questions you need to ask while planning? Maybe you need to figure out what to delegate to the others on your team. Social Table’s how-to guides can help you with that; our favorite is “How to Plan a Corporate Event: 8 Tips to Know”. It helps you jump-start your planning brain by giving you a fairly extensive list of things you will need to consider.

Need to consider COVID-19 protocols when you plan your next event? GlueUp’s “Guide to Corporate Event Planning” includes checklists and tips for navigating events during the ongoing pandemic.

As always, Powerhouse Planning has resources and services to help. We can plan and implement your next event with our total team solution, freeing you up to be the perfect host without having to worry about all the behind-the-scenes moving parts. Want more information on how we can help? Check out this case study, which details how we helped one of our clients with their event facilitation needs. Or contact us today to see how we can help you create the event you’ve been dreaming about.

Have you checked out Powerhouse online recently? Our website has undergone a facelift! And it’s more than “skin deep.” New (free) resources, case studies, and more can help you determine how Powerhouse can best help you. Not only are we constantly updating our website, but we are also ever-present on social media as well. Check us out on Facebook, LinkedIn, and YouTube. You never know what we have going on there! Who knows, you may even get a chance to interact with our president. She’s currently scheduling one-on-one 30-minute sessions where she will speak directly to you and offer advice/mentoring on any of those thorny business issues you might be facing. 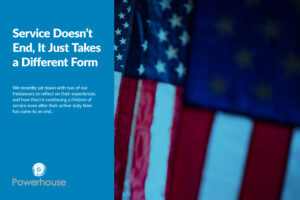 If you know anything about Powerhouse Planning, you know it’s got military ties. Our founder and president is a proud Coast Guard spouse who started Powerhouse because of her deep desire not only to have a portable career for herself, but also to be able to offer the same to other military spouses and veterans. You might say that supporting military families is a passion of hers. While not all of us are military spouses or veterans, we all love our military-connected coworkers. Which is why we thought April was the perfect time to shine some light on two of our Powerhouse freelancers, as April is Military Spouse Appreciation Month. Both are veterans and military spouses who have made service part of their lifestyles.

Sarah Zerr, one of Powerhouse’s project managers, and Crystal Toy, one of our social media strategists, have been with Powerhouse for less than a year after serving in the Marine Corps and Coast Guard, respectively. We recently sat down with both of them to reflect on their experiences and how they’re continuing a lifetime of service even after their active-duty time has come to an end.

PH: What branch did you serve in and for how long? 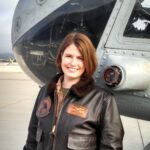 Sarah: I went to the Naval Academy and served in the Marine Corps as a helicopter pilot. All told, I spent over 10 years in uniform. 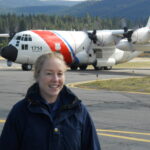 Crystal: I served in the U.S. Coast Guard for 14 years and 11 months. The majority of my work was concentrated in port security, federal law enforcement, and search and rescue missions.

PH: And both of your husbands are also military, correct?

Sarah: Yes, my husband Greg is also in the Marne Corps. We actually met at the Naval Academy and married on graduation weekend. Now he is in the reserves. Proud wife brag: He was recently named the Defense Logistics Agency field grade reservist of the year!

Crystal: My husband has been in the Coast Guard since 2006. He’s currently serving as the Armory Supervisor and Lead Firearms Instructor for USCG Sector Puget Sound.

PH: Congratulations to both of you. Sounds like you have both moved successfully on to being military spouses and veterans. What made you decide to serve in the first place?
END_OF_DOCUMENT_TOKEN_TO_BE_REPLACED 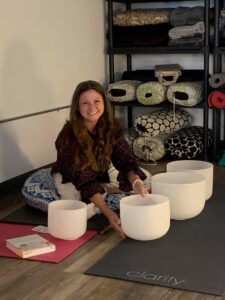 Part of healthy leadership is being healthy in other areas of your life. Setting boundaries and reasonable expectations, creating a healthy work environment, and fostering other important aspects of leadership are easier to model when you are taking care of your own well-being outside of work.

Christy Miu is the owner of Healing Hippies at Creekside in McMinn County, Tennessee, where she not only practices healthy leadership as the head of a small business but also helps her customers find their best wellness practices. Miu is a licensed massage therapist, Experienced Registered Yoga Teacher (E-RYT) 500 and meditation teacher, Reiki master and teacher, Warrior Goddess Facilitator, and personal wellness coach. She is also a mother, grandmother, and member of the community where her business is based. After she had started her own yoga journey to help herself, she shares, “I saw the need in the community for what I had to offer.”

She explains that while there are many places to do yoga as an exercise, “There is more than stretching our muscles. We need to learn to breathe correctly and how to come out of our toxic headspace.” As she looked to start her business, she was not sure a yoga studio would survive on its own in her location, so she started brainstorming what other services she could offer that paired well with yoga. She says, “I had wanted to be a massage therapist when I was younger, and I thought they would work well together.”

END_OF_DOCUMENT_TOKEN_TO_BE_REPLACED

In your journey of leading a team or a small business, have you ever entertained the thought that you could accelerate growth by embracing a business partnership? We hear you—it sounds challenging. But paving a path into new partnership territory can also come with substantial rewards like diversified skill sets, access to new networks, and newly discovered bandwidth (brain gold) for strategic planning. You likely have a dream partnership already in mind. So, how do you set the stage for a healthy partnership so you can stress less and grow more?

END_OF_DOCUMENT_TOKEN_TO_BE_REPLACED

Healthy Partnerships and the Business of Meetings

“Here’s the long and the short of it. I hate hockey, and I don’t like kids.” So says new coach Gordon Bombay in the cult classic movie The Mighty Ducks. A similar sentiment seems to sum up how most people feel about work meetings: I hate meetings, and I’m often not fond of the people in them.

Business leaders agree, however, that face-to-face meetings continue to be one of the best ways to motivate and lead. Meetings are inevitable, and often partnerships are fostered or damaged as a result. Whether you are the leader of the meeting or simply an attendee, you play a role in the partnership. How can you contribute to its health?