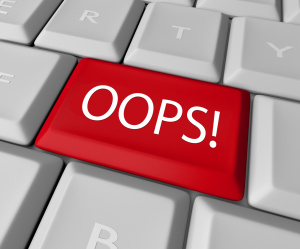 When I sat down to write this column, the idea was to list the “top five” grammar mistakes. So I started to make a list of what I felt were the “top five” mistakes that rub me the wrong way. As I got going though, I realized I was going to go way over my word limit. I also realized that what I think are the most offensive errors may not be what others feel are the worst. Bottom line is that I will have to break this up over a series of columns over time. Please remember there is nothing scientific about this report – what I describe is not any sort of official ranking of grammar offenses. I’m just trying to share some that I see commonly and how to avoid them.

In standard American English, the apostrophe most commonly indicates possession. We use an apostrophe before an ‘s’ to show singular possession (the teacher’s pet, the student’s notebook); or after the ‘s’ to show plural possession (the teachers’ students – if there is more than one teacher; the students’ tests – if there is more than one student). It is also used in contractions, to replace the letters that are left out (don’t for do not, you’re for you are, etc.). One of the more common apostrophe mistakes is using it before the ‘s’ in plurals that have nothing at all to do with possession. These four menu’s need reprinting; they all have coffee stain’s. The apostrophe use in this sentence is wrong both times. Regular plurals do not require apostrophes – menus and stains would be correct here. This menu’s pages have stains shows correct apostrophe use. Takeaway: do not use apostrophes in plurals unless you are trying to show possession. An exception (because we know the English language is full of exceptions) is its (possession)/it’s (the contraction). In this case, its is possessive without the apostrophe. With the apostrophe, it’s is the contraction for it is. Lots of fun, right?

This is a big one.

I’ll tackle a few more common grammar troubles in the next PowerTips newsletter.