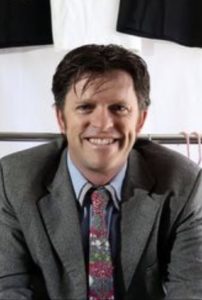 When thinking of ways to fight poverty, our minds may initially drift to charitable giving, political work, or volunteering, but we should also consider what impact our spending habits have on workers around the world. Business leader Andy Lower is doing just that by demonstrating how entrepreneurship can be used to empower workers in developing countries.

Lower’s career has always been focused on market-based approaches to eradicating extreme poverty, but a catastrophic event on the news led him to refocus and make changes in his personal and professional life.

Later that year, a building collapse in Bangladesh resulted in the deaths of 1,134 people “who were making cheap clothes for Western consumers,” Lower says. That event changed him.

“I was personally confronted about the glaring disparity between words and action, specifically regarding our clothing. How can it be culturally acceptable to buy clothes that we know are made in sweatshops when we claim to care about issues of extreme poverty? I had various excuses/reasons that I used to justify not buying in line with my values, so I decided to go all in, and gave away all my clothes and built a new wardrobe from scratch only of clothes where we knew that everyone had been treated fairly,” he said.

Lower co-founded Visible Clothing with a friend, offering adult and children’s clothing beautifully made with the principles of sustainability and fair trade. The workers, pricing, and other aspects of the business are—as the company is named—visible to customers.

I asked Lower why he felt for-profit companies were such an important part of eradicating poverty, and he expressed, “People need to be treated with dignity. Market-based approaches mean that people pay for what they value. There will always be a need for donations and charity, but I believe that need is limited. Long-term eradication of extreme poverty will only happen with financially sustainable businesses. Effective implementation of innovative pioneering ideas is one of the best ways to change the world.”

He added that for those of us shopping in the U.S., over 95% of clothing is imported and prices continue to drop, yet this often means oppressive working conditions. As we enter the start of 2019, Visible Clothing offers an option for consumers and businesses wanting to be more mindful about where their clothes, uniforms, and other textiles come from. The fair trade company also helps connect people to the stories of those craftsmen who make the products.

A new year offers a chance to do things differently or better or to evaluate our imprint on the world around us. Maybe you are considering a major lifestyle change, like Lower when he redid his wardrobe. Or perhaps you want to adopt more sustainable practices in the workplace or make small individual changes through upcycling, repairing, or replacing an old garment with a fair trade item. Lower reminds us, “As consumers we have tremendous power and how we choose to use that power with our spending choices is illustrative of who we truly are.”

And he’s crafted his own vision for the year ahead.

“I’ve spent a lot time reflecting over the last few weeks. I want to be more intentional in standing up for the right thing earlier in the process and generally being proactive in bringing positivity to interactions. The world has so much unnecessary chaos and painful confusion; I want to be on the right side of history and try to follow the golden rule of treating others how I would like to be treated,” Lower concluded.

Learn more about Visible Clothing online or on Facebook.

Have you mapped out your own business goals for 2019? Click here to learn more about How to Set Realistic and Attainable Goals in Business.