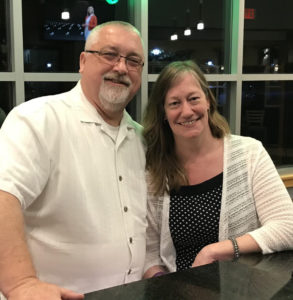 We are extremely excited to introduce you to our “oldest” Powerhouse freelancer, Jennifer McKee. It wouldn’t be too much of an exaggeration to say we’ve been waiting ALL YEAR for this feature! Jen has been with Powerhouse for over six years and is still our number one fan, as well as one of our indispensable, go-to talents. She works as one of our quality assurance geniuses, but she has been known to take on the occasional writing assignment if we beg enough. Jen ensures that the products we turn out are error free and fantastic. Currently, you’ll see her hand in products for clients such as Nomadés and Cape Henry Associates, but given how long she’s been with us, her invisible touch is almost everywhere.

Jen has two favorite things about Powerhouse. Well, we limited her to two or, given her status as a super fan, we’d be here all day. She loves the flexibility that comes with our virtual workplace, but she truly loves “how encouraging, supportive, and just KIND the team is to one another.” We couldn’t agree more. It’s a work environment that founder Jessica Bertsch has purposefully fostered since day one—and Jen should know because she’s been here nearly as long. These are also traits Jen’s taken to heart as she is almost always one of the first to offer an encouraging word or congratulations. 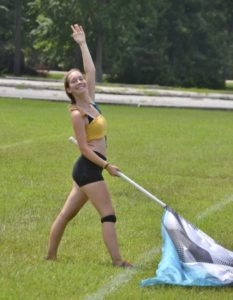 Jen describes herself as “a hot mess,” to borrow a phrase from our founder. A typical day finds her 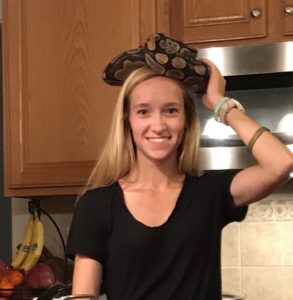 juggling her life, working at figuring herself out, and just trying to be happy. It’s a quest she’s aided in by her husband of seven years, Alan (a sixth-grade science teacher which, we think, automatically makes him a hero), and her daughters, Alex and Maya. Alex is 21 and has just started veterinary technology school while she works full time at a veterinary hospital. Maya, almost 18, is in her senior year of high school and a proud fourth-year color guard member of the Hickory Marching Hawks. Jen isn’t a proud band mom or anything (wink). Her domestic bliss is rounded out by her 3-year-old pit bull, 8-year-old boxer, and her 18-year-old, 4-and-a-half-foot long ball python. Hey, we all have different ideas of what makes a good pet, but we think she might win the most cool pet owner points in our “office”!

When asked about her hobbies and interests, Jen said she enjoys kickboxing, hanging with friends, and SLEEPING. We can get behind those, too! She loves to travel, though she doesn’t think she does enough of it. She also doesn’t think she relaxes enough, which we’re willing to bet is a failing a lot of us have.

Because we’re entering that time of year when we all start to look toward next year, we asked Jen a little bit about what planning looks like in her life. Once she stopped laughing at the very idea of planning, she told us that the best planning advice she can give is this: Plan to have things interrupt your plans. She’s an olympic-level list maker, but life always seems to get in the way. She’s spent a lifetime learning not to be flummoxed by the hiccups that come, but to be flexible and that while the best-laid plans may not go to plan, a general outline is helpful.

We’re pretty sure her ability to change as needed is part of what has made her so successful at Powerhouse. We know she has faith that Powerhouse will only continue to grow and blow clients away with our quality products. We’re just relieved that as far as she’s concerned she’ll be a member of the team for as long as Jess will have her. Which means we’ll see you again in about 20 years when we’re celebrating her quarter-century here!

As always, we asked Jen for some fun, little-known facts about herself. She offered three, though she said none were very exciting. The first is that she has been enamored with military jets since she was 12 years old and her Air Force dad took her to her first air show. She actually loves jet noise! The second is that one summer during college she waited on Stephen King. The third is that, having grown up on Cape Cod and coastal Maine, she can get every bit of meat out of a lobster even though she won’t eat any of it (she’s NOT a seafood lover).

Well, Jen might not find herself overly exciting, but we’re excited to have her talented self as part of the Powerhouse family. Here’s to six-plus years together and many more to come!

Why Planning Early Is Crucial to Success 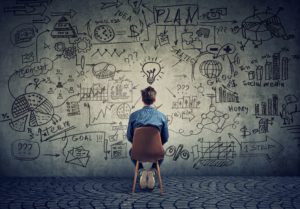 Most of us have probably heard that old saying, “If you fail to plan, you plan to fail.” There’s a lot of truth in that, even if we don’t always want to admit it. Planning—whether you’re planning for a new business, planning for an existing one, or just trying to manage life goals on the horizon—is crucial to success, as exciting as it is. Let’s face it: We all love the dream stage. Thinking about how things will be once the initial work is over is fun. The nitty gritty details of planning how to get from the dream stage to the realities of success? Not so much. Yet there are very real, very important reasons why planning can make or break any dream.

1. Planning provides specific goals/objectives.
Brian Tracy invented the six P formula for personal and business success: “Proper Prior Planning Prevents Poor Performance.” Not surprisingly, his very first suggestion for ensuring success is to organize your thinking. J.D. Meier, bestselling author of Getting Results the Agile Way, states, “…planning helps organize your thinking, shape your future actions, and prepare for the good, the bad, and the downright ugly.” It’s true. Planning results in specific goals or objectives that everyone in your company can look to as guiding principles for both the big and the little decisions that must be made daily.

2. Planning allows for more control.
The more control you have over a situation, the easier it is to handle. By carefully planning the actions you will take, you remove a lot of the guess work from a situation. You can identify potential flaws in your plan or your execution and correct before they become impossible to manage. Kamran Akbarzadeh, founder of Dream Achievers Academy, notes, “Without proper planning we would not be ready to respond to challenges.” He goes on to say, “Planning ahead helps you and your organization become assertive in taking risks and saying no to either conservative or aggressive approaches.” If we are in control of our path, we have a greater chance to succeed.

3. Planning streamlines/makes us more efficient.
This seems like a no-brainer. Having a plan eliminates waste. Of time, of money, of resources, you name it—planning is the efficiency tool of choice. A little time spent planning how teams will be built, what resources you should focus on building this year, or even how you will spend your time can lead to massive payoff in the end. Take the time now to plan how best to utilize what you have so you’re not scrambling in the future.

4. Planning helps identify potential challenges.
There’s nothing like planning for every eventuality. The best asset of planning is time. Proper planning means having the time to think about every possible outcome and to identify what steps can be taken to combat and overcome each challenge. The absolute best factor to take into account when planning is that your plans will change. By taking some time now to identify how your plans might change and what strategies you can implement when life throws you that curve ball, you can save yourself some serious headaches later.

5. Planning strengthens teamwork.
Truly, the bedrock of any organization is the people who work there. Planning fosters an innate ability to build the best teams and to provide them with the framework in which to succeed. If every member of a team is fully aware of the plan and its implementation, they can more efficiently and effectively carry out their duties. In addition, when everyone knows the plan, it’s much easier to figure out how to make individual contributions fit the planned whole. In 2013, Johns Hopkins Medicine (JHM) implemented its first ever five-year strategic plan. Reflecting on its success in 2018, Dean/CEO Paul Rothman said, “A strategic plan is only as good as the people who execute the strategies, and faculty and members across JHM embraced the plan and did their part to make the vision a reality.” The team members at JHM knew the plan and were able to keep it in mind when working their individual parts. The plan was such a success that JHM launched a second five-year plan called Innovation 2023.

Planning can make or break a business. It’s important to plan, to plan early, and to reassess the effectiveness of the plan often. Remember, no plan is perfect and there will be eventualities you just can’t imagine. However, knowing your objectives, having confidence you have the right team and the right time, and feeling in control of every situation are exactly how early planning allows us to overcome and succeed.

For more information on planning early and why it’s a good thing, check out the following articles:
Dream Achievers Academy | “Six Reasons Why Planning Ahead Matters”
Johns Hopkins Medicine | “The Benefits of Good Planning”
Sources of Insight | “7 Advantages of Proper Prior Planning”
Cliffs Notes on Planning
Management Study Guide