We’ve talked about branding content and building websites in the past. And ideally, you’ve been rocking a great, user-friendly, aesthetically pleasing business website this past year. But a website is not (or should not be) a static thing. It should be responsive to your business climate and users—both your present customers and your prospective customers. That means your website can’t be a one-and-done situation. It requires regular review and maintenance to keep your business fresh and relevant. So, let’s get to spring-cleaning your website, shall we?

Take care of the logistics of having/running your website. Is your domain name due for renewal? If so, take care of that now. If not, make sure to note on your calendar when that next needs to be addressed. How about your hosting plan? Is it meeting your needs given your website traffic?

Have you looked at your website traffic recently? Review your analytics. Where on your website are people most actively engaging? Where do they not tend to visit/click? Let this information guide your strategy for content for this calendar year. Ruthlessly edit your content. If it performs, wonderful—figure out what made it a successful piece of content and do more of that. If not? Find a way to repurpose it or kindly bid it adieu. Schedule regular analytics checks and adapt your strategy accordingly.

Review your products and services. Are you still doing what you say you do? Perhaps you’ve previously promoted an offering that hasn’t taken off. Or you’ve expanded your available services. Make sure that any listing of products and/or services reflects what’s currently available and that the pricing is current. If you’ve already got plans in the works to change your pricing in the near future, consider doing it now, while you’re “cleaning” your site, rather than later.

Timing is everything. You don’t want your content to appear out-of-date. Know what’s not “news”? Old stuff. That means your most recent content shouldn’t be over a year old. That the copyright date on the bottom of your page should now read 2019. That any metrics you may boast of, like units sold or clients served or locations you’ve expanded to, should show any growth you’ve experienced.

Keeping everything current also means that any bios or references to staff and their positions are up-to-date. That any changes of physical address or email are reflected in your contact information. That any policy changes, like those joyful legal disclaimers, reflect the most current (and compliant with any changes in regulations) language.

Prioritize function over form. Test the functionality of your website. Do the links all work? (This is particularly important if you share external resources and/or information, as another company’s website changes can make once good links bad.) Anything you would ask a customer to do on your website—sign up for your email list, complete a survey, reach you through a “contact us” button, leave a comment, make a payment—make sure you can perform that desired action. Your goal is for your end user to have an easy and enjoyable experience interacting with your site, so make sure nothing interferes with that aim.

But aesthetics DO matter. Listen to your fifth grade English teacher: Spelling (and grammar) count. Don’t diminish your impact as a subject matter expert in your field over typos or misspelled words. If you tend to have a blind eye to necessary corrections (which is very common when we’re reviewing language we’ve created and used for some time), then ask someone else to look at it with a fresh set of eyes.

Check too for consistency of branding and messaging. If you’ve changed your logo or tagline or marketing materials, make sure that those changes are made to your website as well. Ideally, you should see continuity between your website, marketing materials, business cards, invoices, social media sites, anywhere that your brand has a presence. That consistency should apply to any visual elements, images, and your company’s voice.

Your website should reflect the latest and greatest version of your business. It is your baby out in the world. Take the time to tend to it properly, with a good spring-cleaning and regular checkups, and it can be a tool that will help your baby grow. 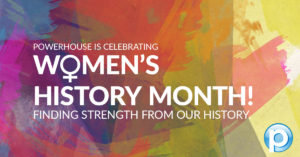 Unless you are completely oblivious, if you live in the U.S. you know that March is National Women’s History Month. Yes, an entire month of the year is set aside to honor women for something we’ve* been doing for a long, long time—succeeding no matter what we’re doing. This is especially true when it comes to business. We may not always have had our name on the company letterhead, or headed Fortune 500 companies, but we are an increasingly important part of all aspects of the workforce. In fact, nowadays it’s about as likely that your direct supervisor at work is female as it is that he’s male. And while it’s true that we now own roughly 38% of all U.S. businesses and that 4 out of 10 of us are the primary/sole breadwinner for our families, we owe our current successes to those who bravely forged the path in previous generations.

For some of us, it may be hard to fathom a society in which women were not an integral part of the workforce. Yet, it wasn’t until 1988 that Congress passed the Women’s Business Ownership Act, eliminating the laws requiring women to obtain their husbands’ signatures on any business documents or loan paperwork. The Act also allowed women to apply for government contracts, a world closed to them before then. Let that sink in: It wasn’t until the late 1980s that women could own and run any business completely autonomously.

American women have been heading businesses, creating businesses, and running the business world in one form or another since our days as British colonists. In 1739, Elizabeth Timothy became the first American woman to head a company and the first franchise “owner” after her husband passed away. She took over her husband’s franchise contract with Benjamin Franklin to publish the South-Carolina Gazette. Though nominally owned by her 14-year-old son, Peter, all acknowledged Elizabeth Timothy as the true owner/operator. In 1973, Katharine Graham assumed control of The Washington Post after her husband committed suicide. She was publisher and Chairman of the Board from 1973-1991. In 1973, Graham was the only female CEO of a Fortune 500 company. Estée Lauder and Madam C.J. Walker established and ran hugely successful cosmetic and beauty companies in the beginning of the 20th century.

While women have historically been placed in roles within the home, we haven’t stayed there. By the mid-19th century, women were dominating professions dedicated to domestic pursuits, including the food industry, the fashion industry, manufacturing, nursing, and social work. The late-19th and early-20th centuries saw a boom in female entrepreneurs. During World War II, even more women entered the workforce, with more being promoted to managerial roles. Post-war, women refused to return to the home and continued to be an active, integral part of the workplace. Today, women head Fortune 500 companies, including those long thought of as within the purview only of men, such as the car and aviation industries.

We aren’t just breaking the glass ceiling in terms of large corporations either. We are reinventing what it means to be a businesswoman, an entrepreneur, and a CEO. We are finding niches that need to be filled and filling them. Women, such as Powerhouse’s own Jessica Bertsch, are looking around and saying, “I’m just not satisfied with what I’m seeing.” Jessica, a military spouse, wanted a career, not a series of jobs as she followed her husband from city to city in furtherance of his career. Prior to her marriage, she had a career in marketing. Once she became both a family woman and a woman who desired a career, she wanted something that would provide a balance between the two. She also felt passionately about military spouses and veterans being able to have careers, not jobs, while still having plenty of time for family. So, she took a risk, and on September 11, 2012, she created Powerhouse Planning with a goal to hire a virtual workforce to support companies in a variety of ways using talent culled from across the country. She’s not a traditional CEO, but six years later, Powerhouse has grown beyond her wildest dreams, with a workforce that calls 12 states home and is only looking forward to more growth and success.

Women like Jessica are only following in the footsteps of generations of talented, driven women. Women who looked around and thought, “There is more I can contribute. More I can do.” Women who took a risk, and in so doing, furthered a movement toward equality and the greater good. Women who had passion for a professional life beyond the home. Women whose idea of fun and fulfillment was to be out there working.

Katharine Graham once said, “To love what you do and feel that it matters—how could anything be more fun?” Today’s professional woman is doing just that—having fun while making a real contribution both professionally and personally. So, this March we are tipping our hats to the women who came before and making a promise. Thank you for making possible the fun we’re having today, and we vow not to stop doing what we love.

Information for this blog came from the following sources. Feel free to check them out and learn even more about women in the workforce, both historically and presently:
amhistory.si.edu/archives/wib-tour/historical.pdf
allbusinessschools.com/business-administration/women-in-business
hbswk.hbs.edu/item/enterprising-womena-history
https://www.naturals2go.com/women-entrepreneurs-history-women-business/

*Powerhouse is not a women-only business, but we are insanely proud of the women who do work here and their accomplishments.